Certainty on Demand: How Labor Platforms are Moving to Higher Order Work

Over the years, we’ve seen a revolution in how labor is supplied because of technology.

First, we saw simple outsourcing—taking one person doing one job and moving the job over to a cheaper person in another geography. That only worked because you could connect everyone via technology—routing phonecalls, e-mails, design documents, etc. halfway across the world so that working with someone in India was as seamless as if they were on another floor in your building.

As emerging markets start to achieve more equality with the rest of the world in labor cost, that arbitrage starts to go away. The best people start to charge more, or they simply move to the US, and the time and efficiency cost of working with labor for less complex tasks starts to not be worth it anymore.

That gave rise to platforms like Amazon Mechanical Turk on the simple task side of the spectrum or marketplaces like Upwork and Taskrabbit where you want someone a bit better, but the tasks are still pretty straightforward. In all of these cases, workers are working as individual contributors—while one person might be managing multiple people, the workers are not connected to each other as a feature of the platform.

Uber and Lyft largely work the same way. Driving is obviously a more complex task than identifying whether an image has a puppy in it, but lots of people can do it, and as long as the driver doesn’t crash or kill you on the way to the movie theater, you’re pretty much ok getting anyone.

If you needed anything done by someone not in your employ for anything more complicated, you are basically looking at some kind of agency work—because more complicated work generally requires teams of people working together. For the longest time, teamwork was inefficient—requiring lots of overhead in planning and setup to get a team with a variety of skills all on the same page and working together on a complex project.

Every new job or set of tasks was treated as unique and constructing teams was viewed as a challenge—so agency work from McKinsey to IDEO, or your corporate law firm, was very expensive.

That’s starting to change as companies realize that for many aspects of teamwork, 80% of most work frankly isn’t that hard and looks somewhat similar to a lot of the other work. You could build semi-rigid operating plans that cover most of the jobs that come through.

Take Block Renovation. Block takes the stressful and sometimes disastrous process of remodeling and makes it simple. Instead of going out into the market and getting a contractor, which is essentially an agency, and an architect (another agency), it focuses on the 80% of bathrooms where all you’re doing is just taking out old stuff and putting in new stuff. They preselect the inventory of fixtures, create standardized pricing, and vet for the basics of contractor reliability—has references, is licensed, etc. The bar is lower here because the jobs are simpler—and the worst aspect of having work done, the price negotiation, is done upfront.

They’re eliminating the work that a customer needs to do in a marketplace—the sorting, vetting and labor management—and turning it into a service with something of a guarantee, which puts the marketplace aspects on the backend under the management of the company.

In short, they’re offering Certainty on Demand—a term coined by Michele Serro, the founder of Doorsteps. If your job fits their criteria, they’re selling the certainty that at the end of X time, you will definitely have a new bathroom. That’s much easier to do when you’ve taken apart the process and put it back together again in a way that optimizes for getting to the finish line with certainty over and over again at scale.

Investors took notice and gave the company over $4mm in its seed round. 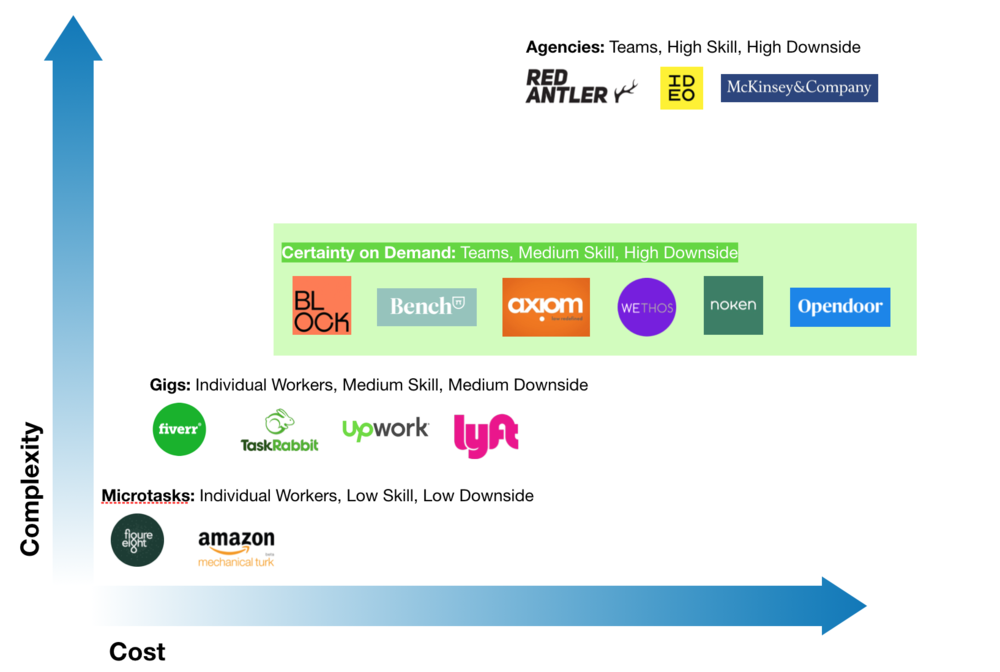 It’s a model that is starting to get repeated in the market. Bench looked at the process of bookkeeping, realized that 80% of the clients had the same simple, straightforward set of needs, and built in automation to service them more efficiently and less expensively than an accounting firm that treats every new client’s set of needs from scratch. Noken replaces a traditional travel agency quite effectively for 80% of the trips in the market where the person is going to a new country wants to see all the stuff that everyone agrees you should probably see. At the same time, they figure out which customer decisions are major consumer satisfaction leverage points—like the quality of the hotel. Just a handful of choice can make an automated process appeal to the vast majority of the market. These platforms enable automation to solve higher order problems effectively, driving above market revenues for lower cost tasks. Consumers are thrilled with the experience, which often seems like “magic” that they are being served so well on such “low” costs compared to full service agencies. Axiom does this for law—providing “the same” legal service for way cheaper because it has filtered which tasks it makes sense for it to do and has more throughput than a traditional legal firm.

There are a multitude of higher order projects that fit this same pattern—too complex for just one person, but 80% similarly structured to a million other similar projects that came before it. Instead of paying for a full on agency with all its custom overhead, Wethos can quickly spin up a group of people from its curated talent network, give them a framework for collaboration, and help you accomplish your goal for a serious discount to a traditional agency. The full potential of a creative agency is something you wouldn’t have taken advantage of with a project like this—much in the same way that Block Renovation doesn’t need to hire an architect for every new bathroom they give a facelift to, Moving curation behind the curtain is key, too. Why outsource the selection of the talent to the customer when the platform knows who is actually good?

The exciting aspect of these startups is that they can turn on revenues from day one—they often experience solid margins from the beginning, and those margins improve over time as they expand the number of playbooks they research and implement. Wethos will add more verticals of work. Noken will add more countries. Block will do kitchens one day and the list goes on.

Labor will find itself able to complete more task, more appropriately funneled to the right level of work, and business will get more efficient, thanks not only to technology but to thoughtful process design.