A few weeks ago I started having a strange sensation in my right thigh. When I moved my leg, it felt as if something was slithering between my skin and my muscle in the marked area (these are not my legs, just a convenient image I found on the internet) 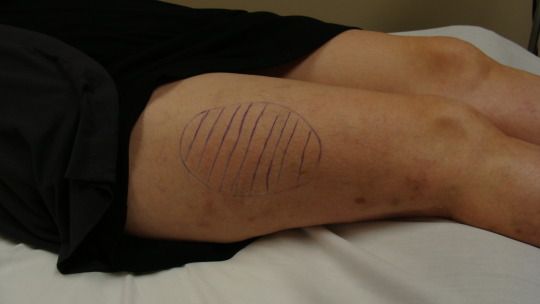 The feeling wasn’t painful, just a bit creepy. The creepiness probably being the result of having watched one too many Alien movies.

Following my main approach to all things medical – which I have learned from my amazing mother who worked in a pharmacy for many years – I ignored it. The idea being that the body is pretty good at fixing problems or at least routing around them. In this case though the symptom persisted. I tried stretching, foam rolling, massage, all with no improvement. As it turns out by treating the area in question, I was focused on entirely the wrong spot.

Eventually I decided to go see Keith Pyne, the genius doctor and physical therapist who helped restore my shoulder. I described the symptoms and he immediately said: oh, that’s easy, you have Meralgia Paraesthetica. What’s that? It’s an injury to the lateral cutaneous nerve of the thigh. That sounds, ahem, dangerous? No, not a big deal, I will open up the area where the nerve passes through your pelvis, you will do some exercises and it will all be fine. At that he proceeded with moving my leg and massaging my groin. Sure enough, I felt an immediate improvement. 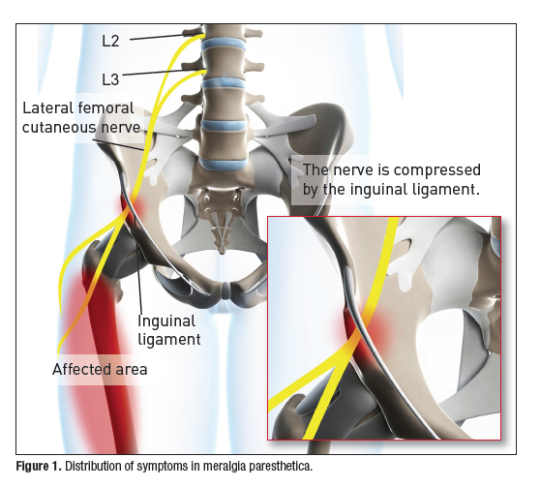 But not so fast. Later the same day, the problem was back in full force. Was the diagnosis wrong? Was I expecting improvements too quickly? Well definitely the latter. So I proceeded with the hip flexor stretch that my therapist had recommended

Again, the stretching helped and yet after a bit my symptoms returned. What was going on? One day I wound up doing the stretch wearing not my gym clothes but my regular jeans and I had a massive “Duh” moment. Turns out that for several years I have been carrying my house key in the change pocket of my jeans 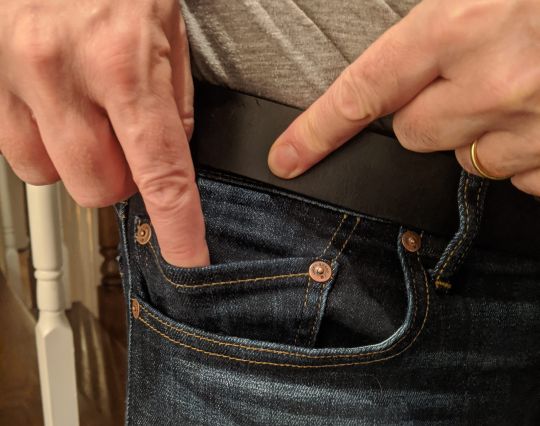 Mystery solved. Whenever I had been sitting down with the key in my pocket it had pressed up against the area in my pelvis that the nerve passes through. Sure enough one week after no longer carrying the key there, the problem has completely disappeared.

Leaving just one question: where to carry the key instead?